Almost:
Chris Haslam has wrapped up The Canary Islands trip and has been flexing his Photoshop/ llustration skills as of late. NEW almost Team Series courtesy of Mr. Haslam's hands to come in the very near future.

Torey Pudwill is on a one man mission to single handedly produce more editorial content than the rest of his almost peers. Guess who's working on another Interview. This one is said to be a Milestone of sorts. Torey also finds himself returning from Edmonton Canada where he partook in a WEST 49 demonstration, where he was quoted as "the demo/signing Killer!"

Lewis Marnell has been invited/nominated as one of the Years best Swedish Skaters operating outside of Sweden. The festivities are set to commemorate on December 13th.

If you have not yet, which I prey you have, please be sure to check out Lewis's latest Interview effort as "The All Seeing I" in Kingpin November Issue #59. Lewis shot the whole kabosh in four days!

Greg Lutzka has been Blowing up on MySpace!

Daewon Song will be answering questions in the post-modern offering of SLAP Magazine, you should be able to attain all the insight you thought to ask about and forgot to submit.

Rodney Mullen is without a doubt on the street now at this very moment! Creating new methods of standardized skateboarding. He is most definitely taking his part in the new almost video very seriously. At his age you have to appreciate what he has and continues to achieve! I wish I could give you a sneak peek but that just wouldn't be fair to your eyes.

Cooper Wilt has been spending most of his waking hours in front of the lens of Seu Trinh of TWS fame. So far it's been difficult to pin Seu down since he's become quit popular as of late and seems to have once again embraced the idea of traveling outside of the South of California. But rest assured that when Seu is back in the So-Cal saddle again, Cooper will have plenty of content for his well worn glass eye of sorts.

Have a look at our corporate headquarters with our host the one and only Tim Sanderson:
www.almostawebsite.com

BLIND
Congrats to Jake Brown who got 2nd in the Sao Paolo Mega Ramp event in Brazil.

Morgan Smith just landed in southern Cali to keep filming and shooting to finish up his New Jack for an upcoming issue of TSM. Click here for Morgan's SBC web interview.

James Craig is almost 100% healed from his arm injury and ready to keep filming with the guys for the video.

Danny Cerzini is off to Brazil to compete in this years Converse finals.

Chris Oliver is heading to Australia for an epic three month road trip starting from Brisbane on December 11. You can follow the trip on Mpora – links to follow.

Congrats to Sam Beckett who got back from the States after winning the Am LG vert contest.

Willy Simon had the cover and a poster and a 10 page interview in the Sugar issue 101!

Turn on to fresh spanking Blind TV and more at
www.blindskateboards.com

ENJOI
Jerry Hsu is HEALING in ways you never thought. He carries a cane and hobbles about in Hollywood these days, frequenting Art Shows and the like. On any given day you might like to head on over to www.enjoico.com and see what Jerry may or may not be having for breakfast, lunch or dinner. Which Thrift store might have that special something you have been on the hunt for or just some random crap that recently hit the walls of his San Jose home.

Cairo Foster just wrapped up an excursion to Mexico City with the traveling group of men referred to as RVCA. There should be an Article which documented said travels inside a future offering of the SKATEBAOARD MAG soon enough.

Louie Barletta is skating THE WORLD once again! He recently completed a mission to Australia with the likes of the comedic carvers over at KRUX Trucks Co. and after spending one day back in The States he was off again… this time, to the Canary Islands and Barcelona to work on an upcoming Interview and some EU editorial.

Caswell Berry is off to Puerto Rico as we type this. He is beginning his Press junket to ensure the success of his latest achievement. "The Caswell" Skate Shoe

Jose Rojo is at this very moment trying to convince "The Bosses" that he is ready, willing and able to join the ranks of those that are referred to as Skateboard Professionals.

We strongly urge you to send us you plea's as to why you think Jose should/should not be pro. Please feel free to air out you view points here: www.slapmagazine.com

Nestor is back in the states again! He contracted an unfortunate case of Montezumas Revenge and was debilitated for a majority of the RVCA Mex invasion. He did however pull it together for one day to accomplish what the team had set out to do. Look good on a skateboard.

Wieger Van Wageningen made his way out to Los Angeles this week to wrap up the latest WESC catalog shoot. Rumor tells of Legendary Magician Harry Houdini's Hollywood Hills mansion as the site of the crash and some incriminating pictography portraying Wieger as a drug addicted womanizer? Strange group the Superlative Conspiracy.

Meanwhile Simo was shooting in Barcelona with some of the Perus dudes. www.enjoico.com 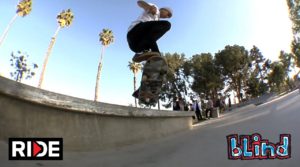 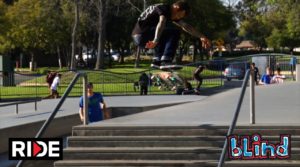 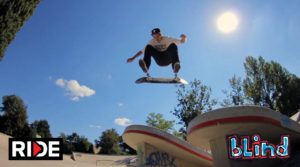 Almost Skateboards – A Dae on the DL , Daewon Song

Blind Skateboards – This is not a test trailer